As we have now passed a slightly wet June and the weather is getting better, I thought now would be a great time to share some ideas about improving the cycling infrastructure in Greater Victoria. Let’s start with my ride to work: the Haultain bikeway. This is already one of the best east – west connectors in the core but it needs some work to make it great.

Why Haultain?
Flat – unlike Fort to the south and other roads to the north, Haultain is largely flat.
Quiet – Haultain has very low traffic volume, likely because of the traffic calming that already been done
Already traffic-calmed – Saanich and the City of Victoria have already spent money and effort making Haultain pleasant for cyclists through closing off intersections and adding speed humps.
Existing connections – it already links many other regional bikeways including the Seaside Touring route, Dean Ave, and via Cedar Hill/Walnut/Chambers/Caledonia gets you to Vancouver St.

So if it’s so great, what needs to be done?
Designating it as a bikeway
None of the three (Oak Bay, Saanich or the City of VIctoria) jurisdictions that Haultain cross designate it was a bike way.  It is identified as a route in the Oak Bay Active Transportation Strategy (an unofficial plan) and the it is part of the CRD’s PCMP Primary Inter-Community Network, largely because those of us who helped craft that document insisted on it.

Repaving Haultain in Oak Bay
To say that the road here is terrible is an understatement. Unlike sections further west, there has been no recent paving here.

Prevent through motor vehicle traffic at Haultain and Foul Bay
This intersection needs a barrier like the intersections at Richmond and Shelbourne.

Widen the crossings as Richmond and Shelbourne
Neither of these intersections are wide enough for the volume of traffic through them.

Add traffic calming on Haultain between Shelbourne and Cedar Hill Rd
This section can have fast moving vehicles, but adding traffic calming is impossible unless BC Transit removes the 22, something they are already talking about doing.

Add a connection to the Vancouver Street bikeway
Haultain’s biggest problem is this lack of link. Although such a link exists via Cedar Hill and Walnut St in the official City of Victoria bicycle plan, but nothing actually exists on the ground.

Over the next few days I will be sharing a section by section view of the bikeway with specific recommendations on how to make it better.

With Phase 1 complete, the next phase of the CRD Pedestrian and Bicycle Master Plan is afoot. There is a public open house on the 29th of June from 5pm to 8pm. It will be held in the lobby of the CRD Building (625 Fisgard St). More details below: 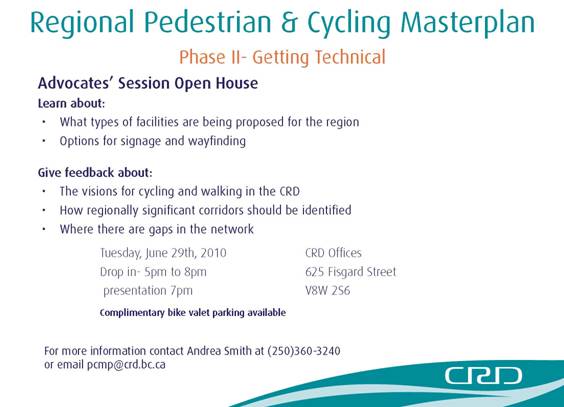