Eager to see how their transportation demand management plan was actually working, Camosun recently embarked on a first-ever mode share count at both their campuses. Given that Oak Bay plays host to their Landsdowne Campus parking lots (Saanich gets the interesting bits like the buildings), I thought Iwould highlight a few preliminary results here. (It has nothing to do with the fact that I stood for several hours in the cold working on the count). Take a look: 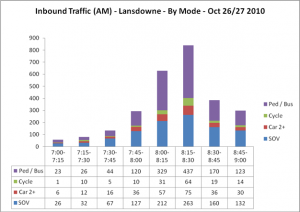 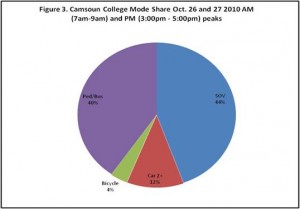 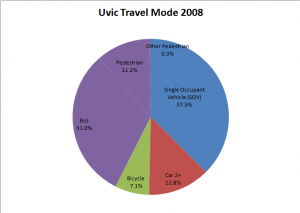 The 2010 count data, which I was also involved in, isn’t available yet, so I had to use the 2008, from UVic Sustainability’s page. Both use the same method, with a few differences:

The data shows that Camosun has some work to do to catch up with UVic’s numbers, although given the suburban nature of Interurban, they are surprisingly close. One key barrier to greater cycling and walking was distance (in the 2009 Tod Litman-written [download id=”4″] (PDF, pg 19-20) in 2009. And this is only going to get worse when the various nursing and other health care programs move out to Interurban at some point in the near future. Nice to see the hard numbers though. Makes it easier to sell pedestrian, cycling, and transit improvements to possibly skeptical councils.